Wanna be the Strongest in the World! Wiki
Register
Don't have an account?
Sign In
Advertisement
in: Characters, Female Characters, Berserk Wrestler

Juri has fair skin, mahogany shoulder-length hair and red eyes. She is often seen in her wrestling gear which is a black and red one piece with black boots, gloves and elbow pads.

Her Miyabi attire appears to be a similar style of Berserk's, with a blue tracksuit top, the sleeves being a little lighter and matching sweatpants.

Juri seems to be rather soft-spoken, however she is cunning and knows what's going on. For example, she is willing to cover up for Elena whilst the mystery of who Blue Panther was was ongoing, lying to Jackal and saying that Blue Panther was herself when it was in fact Elena. When Rio is taken out by Blue Panther in a later episode, Misaki notices that Juri's sleeper hold was used, so it is actually rather hard to tell if it was Juri or Elena under the disguise at first.

Despite her rather devious side towards Jackal at first, Juri seems to be polite and a friendly person in general. She's also strongly implied to be an excellent mentor, as it was through Juri's training that Elena became strong enough to equally match Sakura in their match together.

Juri is very powerful indeed, as it is stated that she is a higher rank than Misaki, the ace of Berserk, who is ranked #12. Therefore, Juri is capable of taking almost anyone out, even Misaki; this was seen when Juri, in her guise as the Blue Panther near-casually defeated both Chinatsu and Rio as preset to her extending a pro-wrestling challenge to Sakura in Elena's stead. Misaki herself would be visibly frazzled with the prospect of Sakura facing off against the disguised Juri, after seemingly discerning Blue Panther's true identity, imploring Sakura to instead refuse said challenge as she is fully aware that her protege's fighting prowess is still nowhere near Juri's level. However, Juri's rank in Shangri-La is unknown, but it must be between #11 and #2.

She is fast as she is strong. Proven when she was able to execute a quick fireman lift powerslam and performed a quick submission hold in such a fast pace. 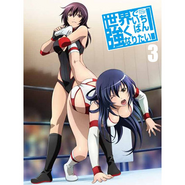 Juri does her firemans cary slam on Misaki

Juri prepares to do her firemans slam

Juri's past is shrouded in mystery however Jackal does hint that she was a lot like her apprentice as she was Misaki's rival during the latter's Idol days (similar to Elena and Sakura respectively). At some point Misaki joined the Wrestling circuit supposedly leaving Juri behind as a quick flash was shown from Misaki's perspective during Elena's fight with Sakura showing younger versions of Misaki and Juri. Like Misaki Juri was trained by Jackal and then joined Shangri-La where she was higher than Misaki but for reasons unknown left and started Miyabi.

She makes her unofficial first appearance in Episode 7 as Blue Panther where she replaced Chinatsu Suzumuto's supposed opponent but the Berserk rookie refused to back down and excepted the challenge where she was easily defeated by Juri.

In Episode 9, she is seen overpowering a younger Miyabi student, later she and Jackal discuss Blue Panther and Juri reveals her connection to the Wrestler and that her target is Sakura Hagiwara. Again donning the Blue Panther disguise Juri attacks Rio Kazama before her rematch with Sakura where she challenges Sakura to a match where if she loses she retires from Wrestling despite protests from Misaki Sakura accepts the challenge as well as the terms.

In Episode 10 she appeared in Jackal's booth no longer disguising herself as Blue Panther.

In Episodes 11 and 12 She was by Jackal's side during the climax overseeing Elena's match with Sakura in the end she encountered Misaki and Kanae as it seems all was forgiven between them.

In ova 3 she along with Elena challenge Misaki, Sakura and Moe in the Hotwater bath.

Community content is available under CC-BY-SA unless otherwise noted.
Advertisement