Wanna be the Strongest in the World! Wiki
Register
Don't have an account?
Sign In
Advertisement
in: Characters, Female Characters, Galleries

She is an adult woman with green shoulder length hair and golden eyes, she has a slim body.

As a reporter she looks for juicy stories and tries to convince Misaki to help with the sweet diva's stuant, and tries to write a story about Sakura during her early career.

However she's not without morals shown in her dropping convincing Misaki to take part of the stuant seeing her friend refusing to relive the past and taking pity on Sakura when the audience start jeering her, and refusing taking photos of her crying after her loss to Rio, and a flashback of her looking at a younger Misaki with sorrow as she struggles in a knee bar by Jackal.

She has an innate ability read people with figuring out Misaki helping Sakura due to having a similar background despite Misaki refusing otherwise.

She seems hopeful when she believes that Sakura will get her first victory soon only to be proven wrong.

She can be a bit extreme as shown in the ova's where she beats Chinatsu and Kurea, and maximizing the boiling water with a stick. She was also fairly confident in that she could kick Misaki’s butt in mud wrestling.

As a former wrestler Kanae still has it in her despite not being able to compete due to her back injury.

In ova 1 she was able to carry Chinatsu like a bag and tackle Kurea in ova 2 and having a tussle with Misaki in both ova's.

She was a former wrestler in berserk gym and was one of the golden age girls along her friend Misaki and mentor Jackal.

At some point she received a back injury forcing her to retire, she became a journalist who writes articles about wrestling.

Kanae in her wrestler outfit 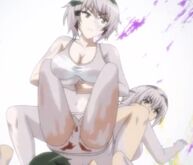