Wanna be the Strongest in the World! Wiki
Register
Don't have an account?
Sign In
Advertisement
in: Characters, Female Characters, Berserk Wrestler

Kurea is a tall and physically fit woman in her late teens, she has magneta colored hair with a yellow streak on the edge that covers her right eye (her eyes are color red).

Her wrestling outfit consists of a leather sleeveless top, red in color and red underwear with black boots.

Like all members of Berserk, Kurea's gear consists of a white jacket with red sleeves and a red collar with the Berserk logo on the left chest area, and red track pants.

Unlike the other Berserk Wrestlers, she is not sadistic as the others (making a mockery out of Sakura for being a beginner). But she is rather aggressive and proud of being a strong wrestler.

Kurea is a powerful wrestler, using power-based submission moves and maneuvers such as Boston Crab Hold, German Suplex and Standing Powerbombs. She is seen as a tank among the Berserk Wrestlers, mostly seen wrestling bigger wrestlers.

She was first seen along with the rest of the Berserk Wrestlers in Episode 2 when they are about to train Sakuya. She was among the first and took her down in such a short time with a Piledriver.

She was then seen in Episode 4 where she pins Sakuya in a Boston Crab Clutch (a submission hold heavily used by many Berserk Wrestlers). But seeing Sakuya's determination of fighting on. She proceeds to quickly take her down with brute force and finally defeated her with a Powerbomb.

On Episode 7 in the tournament. She fought a foreign wrestler but lost. She was with the Berserk Wrestlers on Sakuya's fight against the Blue Panther.

She also makes her appearance in the second episode of the OVA, where she spars with Sakuya in a Sumo Lotion Wrestling training. 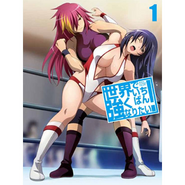 Kurea lifts up Sakuya for a Backbreaker

Kurea's appearance in the OVA

Community content is available under CC-BY-SA unless otherwise noted.
Advertisement